Why Latin America is the deadliest place for environmentalists 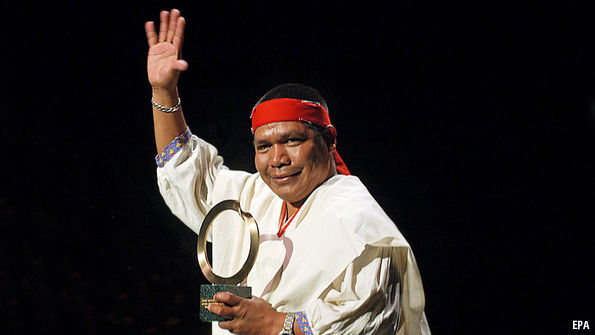 ISIDRO BALDENEGRO LÓPEZ, a farmer and a leader of the indigenous Tarahumara people, had spent much of his life campaigning against illegal logging in the Sierra Madre region of northern Mexico. On January 15th he was shot dead. His father died in the same way, for defending the same cause, 30 years before.

Defending nature is a dangerous occupation, especially in Latin America. According to a recent report by Global Witness, an NGO, 185 environmental activists were murdered worldwide in 2015, an increase of 59% from the year before. More than half the killings were in Latin America. In Brazil 50 green campaigners died in 2015. Honduras is especially perilous: 123 activists have died there since 2010, the highest number of any country relative to its population. Berta Cáceres, an indigenous leader who was a prominent campaigner against dams and plantations, was murdered there last March.

Why is Latin America so deadly? One reason is its abundant natural resources, which attract enterprises of all sorts, from multinationals to mafias. When prices are low, as they are now, the most rapacious do not go away; to maintain their profits they become more aggressive, says David Kaimowitz of the Ford Foundation, which gives money to good causes. New technologies open up new battlefronts. Soyabeans bred to grow in tropical conditions have encouraged farmers to displace cattle ranchers, who in turn have advanced into the rainforest. Small prospectors can now extract gold from soil rather than just hunting around for nuggets. That opens up new areas for exploitation, such as San Rafael de Flores in south-eastern Guatemala, where activists have been murdered.

Often, as with Mr Baldenegro and Ms Cáceres, the resisters are from indigenous groups; a third of the environmentalists murdered in 2015 belonged to such groups. Their defence of traditional livelihoods like fishing often complements global campaigns on issues like climate change. Indigenous peoples and other small communities manage territories that contain nearly a quarter of the carbon sequestered in tropical forests, estimates Rights and Resources International, an advocacy group. Their alliances with international pressure groups have brought more attention but have not reduced the violence.

Confrontation often happens along frontiers that are either lawless or poorly policed. After Ms Cáceres was murdered, police told journalists she had been killed in an attempted robbery. They have since arrested eight suspects, including serving and former military officers and two employees of the firm developing the dam she opposed. But the Honduran government has yet to order an investigation into the people who ordered the killing, says her family. The company denies any involvement in the crime. In Mexico, the governor of Chihuahua state, where Mr Baldenegro was killed, says he wants an investigation, but little progress has been reported.

The odds of finding the culprits are greater if the victim is foreign. Dorothy Strang, an American nun who fought to protect the Amazon rainforest, was killed in Brazil 12 years ago. Both the gunman and a rancher who had hired him eventually went to jail. But that is an exception.

In states from New England to the Midwest and across the South, conservative lawmakers have introduced or enacted legislation to erode union powers and abortion rights, loosen gun regulations, expand school-choice programs and slash taxes and spending.

State Senator Scott L. Fitzgerald of Wisconsin, the Republican majority leader, said conservatives in the states had taken the party’s national victories in November as a directive to “shake up” government.

Indeed, governments often take sides against the activists, even though many have signed a convention drawn up by the International Labour Organisation that requires them to consult groups affected by development projects. In December last year Ecuador’s environment ministry said it would shut down Acción Ecológica, a group that backed the Shuar people in a fight over the opening of a copper mine. The government says the group encouraged violence. Brazilian lawmakers are considering a change to legislation that activists fear could prevent the creation of new indigenous reserves.

In Honduras, politicians have been linked to attacks on opponents of a hydropower project at Los Encinos in the west, according to Global Witness. It cites Roberto Gómez, an indigenous activist, as saying that his group was “evicted by a squadron of around 15 police”, joined by civilians. They “destroyed our crops, they burnt our food”, he says. Until governments fight such violence instead of abetting it, the ranks of martyrs will grow.